The Furious Flight of 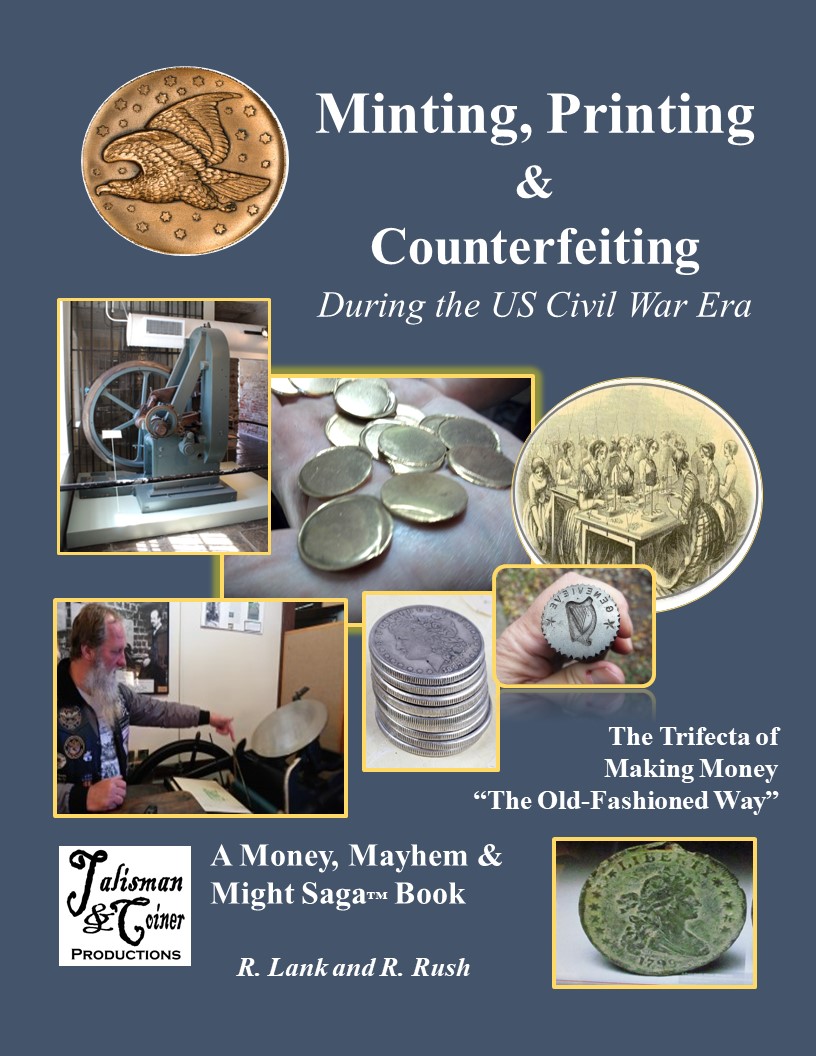 Where Did All the Southern Dough Go? 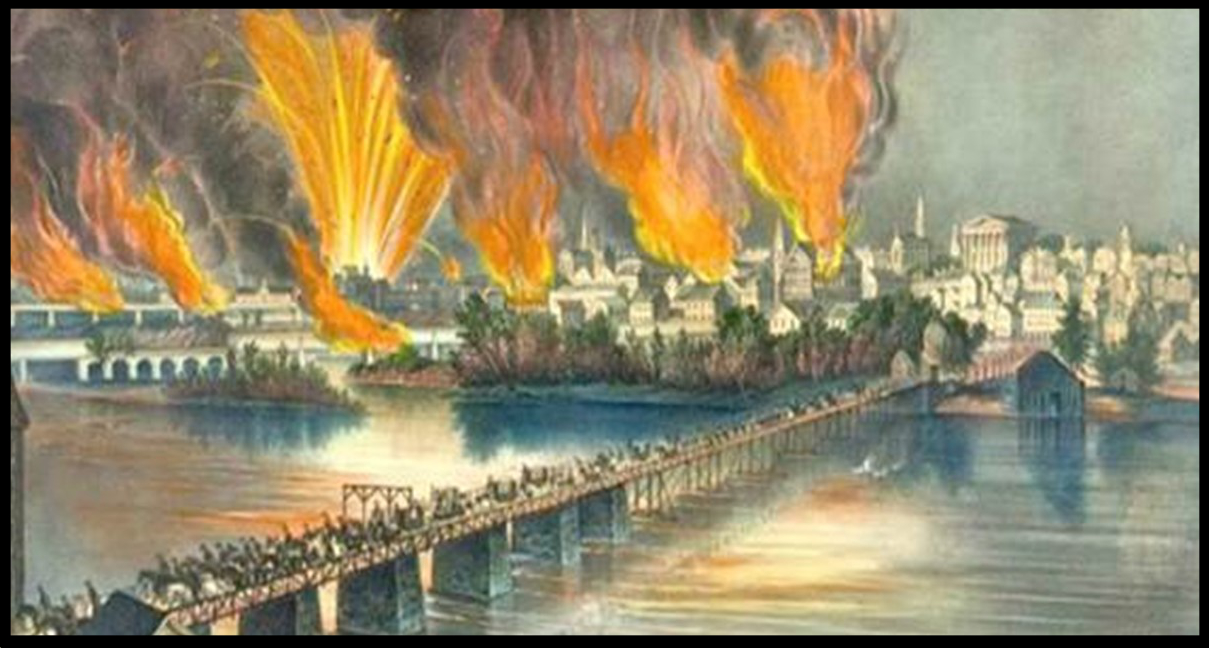 "The Queen City of the South has Fallen!"

On April 2nd of 1865, the Union forces led by General U.S. Grant break through General Lee’s defenses and the Confederate capital falls.

Everyone flees with whatever they can gather up, many crossing the James River on bridges that are soon burned . . . 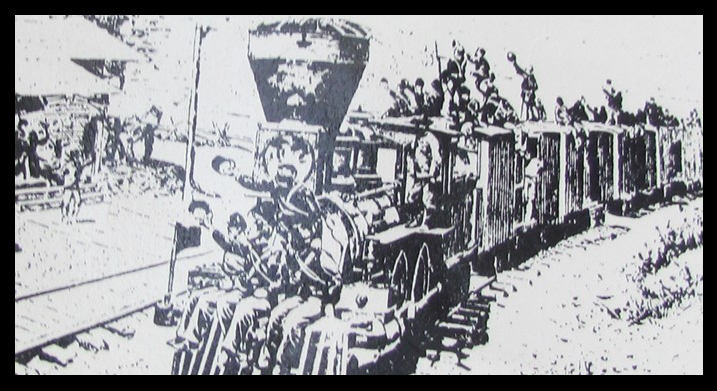 Steam Train racing away with people hanging on for dear life!

Prominent people and the wealth of both the CSA Treasury and the biggest Richmond banks are hurriedly stashed aboard several trains all headed south on the Danville line. Private wealth is loaded aboard, too, and the trains depart into the night of the 2nd. People of all walks of life climb aboard the trains and hang on for dear life!

...studying the manifest of money loaded on board...

Confederate Treasury employees and young Navy Midshipmen from Richmond study the manifest of money loaded on board, which purportedly included $85,000 in gold, $36,000 in Mexican silver reales, “lots of copper coins” (amount unspecified), and millions of dollars in Confederate currency and bonds.

(The Protective Guard, led by adventurer and Navy man William Parker, was 150 men strong — some as young as 16.) 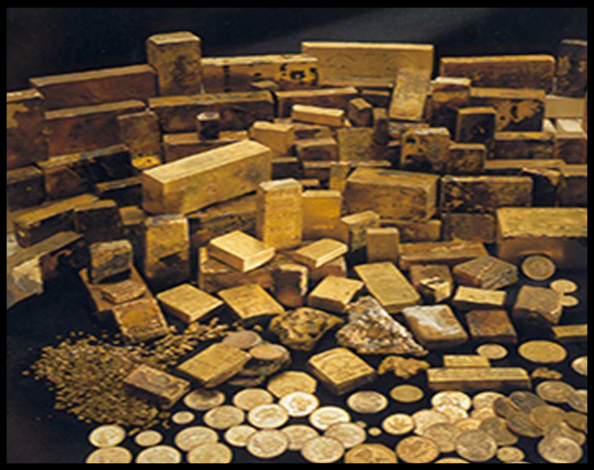 Much of the Richmond Bank Gold is ultimately stolen by bushwhackers

The Treasure Train has on board at least $450,000 from the depository banks alone — and custody goes back and forth between the banks and the Confederacy. Money is disbursed from the CSA Treasury along the way; some may have been left behiind in South Carolina because of its extreme weight. Much of the Richmond Bank Gold is ultimately stolen in laate May by bushwhackers in Georgia.

Bear in mind that $1 in 1865 is roughly the equivalent of $25 today! So that $450,000 represented at least $10 million worth of purchasing power — and it wiped out the bug Richmond Bank’s reserves. 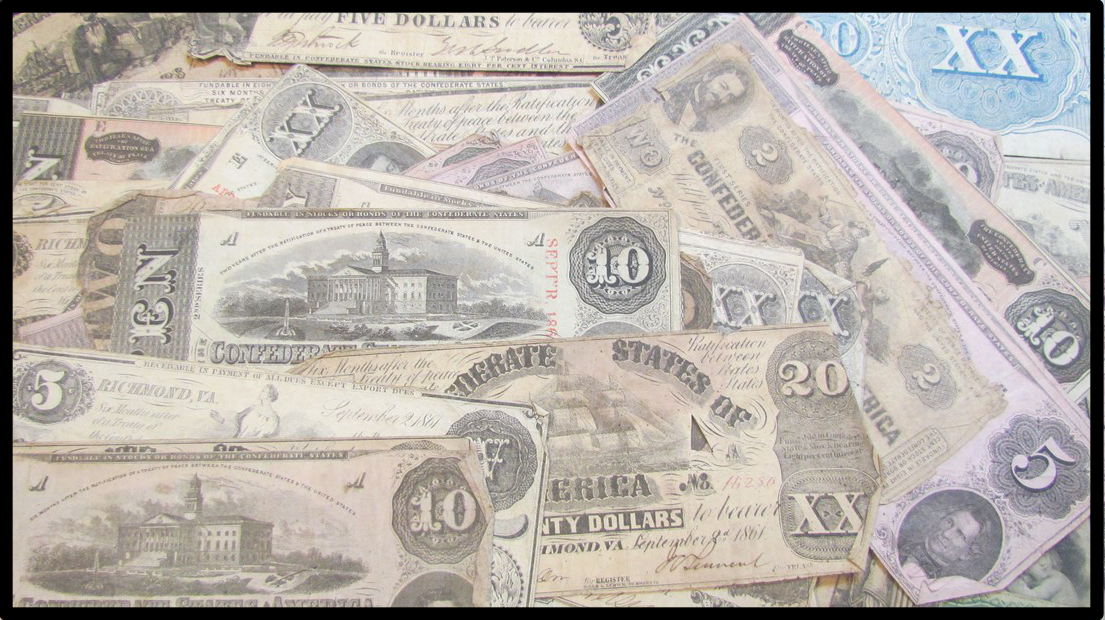 As much as $600 million in Confederate bonds and currency was on board. After there was no more railroad track in Abbeville SC, much of it was tossed off the wagon train like bales of hay because it was worthless by then. The rest was burned in a huge bonfire in the camp of General Basil Duke outside of Washington City, GA just before the Federal forces captured the Treasure train. 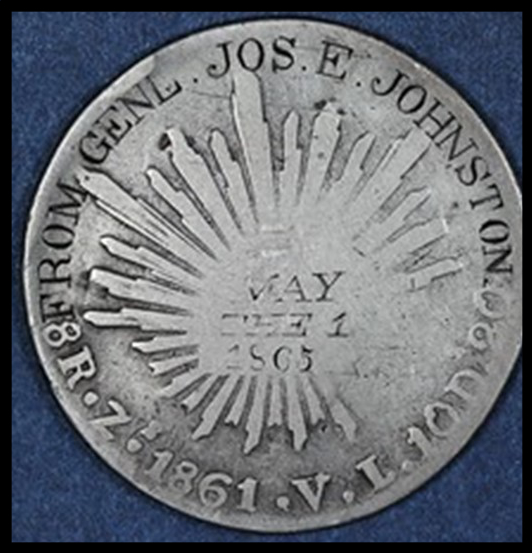 Once the Treasure Train made it to Greensboro, North Carolina, General Joe Johnston — Commander of the Army of Tennessee – rode from Durham to collect $39,000 in Mexican reales to pay his remaining troops. That was in early April. By late April, he had surrendered to General William T. Sherman. Those reales were distributed on May 1st — the last payroll for his army. Many were engraved with his name and the May 1st date — as a memento to his men.

(Reales were in the Confederate Treasury because the South continued to sell cotton to Mexico, unaffected by the Northern blockades of major ports.) 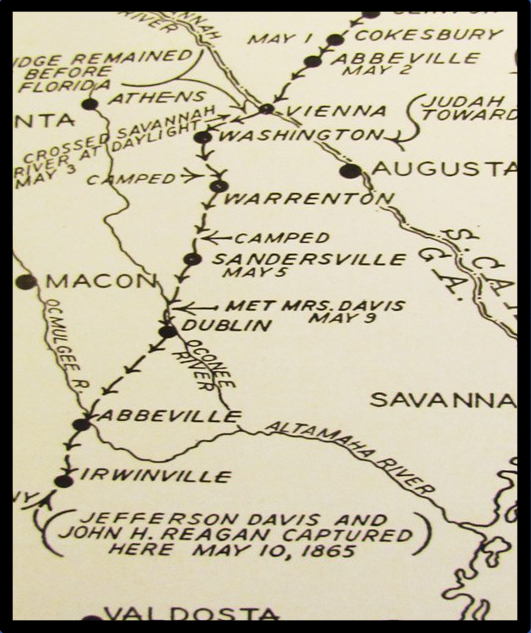 This map — showing the lay of the land in Civil War times —  shows the route taken by the Confederate wagon trains and the separate Davis entourage once in Georgia. They all crossed the Savannah River between what was once Vienna, SC and Petersburg, GA on a pontoon bridge built by the CSA Army.

There was no train that crossed the river; the gold, silver and paper money had been loaded onto wagons, ambulances and farm-carts in Abbeville, SC. It was perilous and it is speculated that some of the money was left on the So. Carolina side of the river . . . 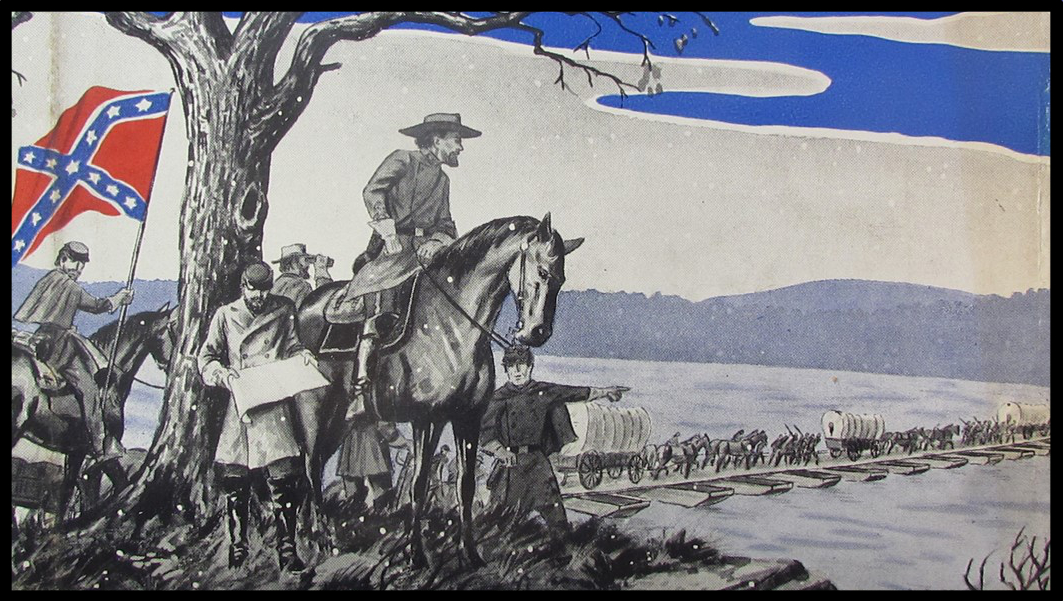 From Vienna, SC to Petersburg, GA across the Savannah River on a pontoon bridge

From Abbeville, the Treasure Train became a wagon train; it was placed under the protection of General Basil Duke of Dentucky. When the wagon train — still loaded with wealth, as well as the CSA Archives — made it to the Savannah River, it crossed very carefully between the now-drowned town of Vienna, SC and Petersburg, GA on a pontoon bridge.

Crossing a wide river on a pontoon bridge with so much weight was risky. Gold and nearly wothless paper money had become ballast, slowing down progress . . .

By nw, early May, the Union forces were in hot pursuit with cavalry — boxing in the fleeing wagon trains and tightening the noose around further escape options . . . 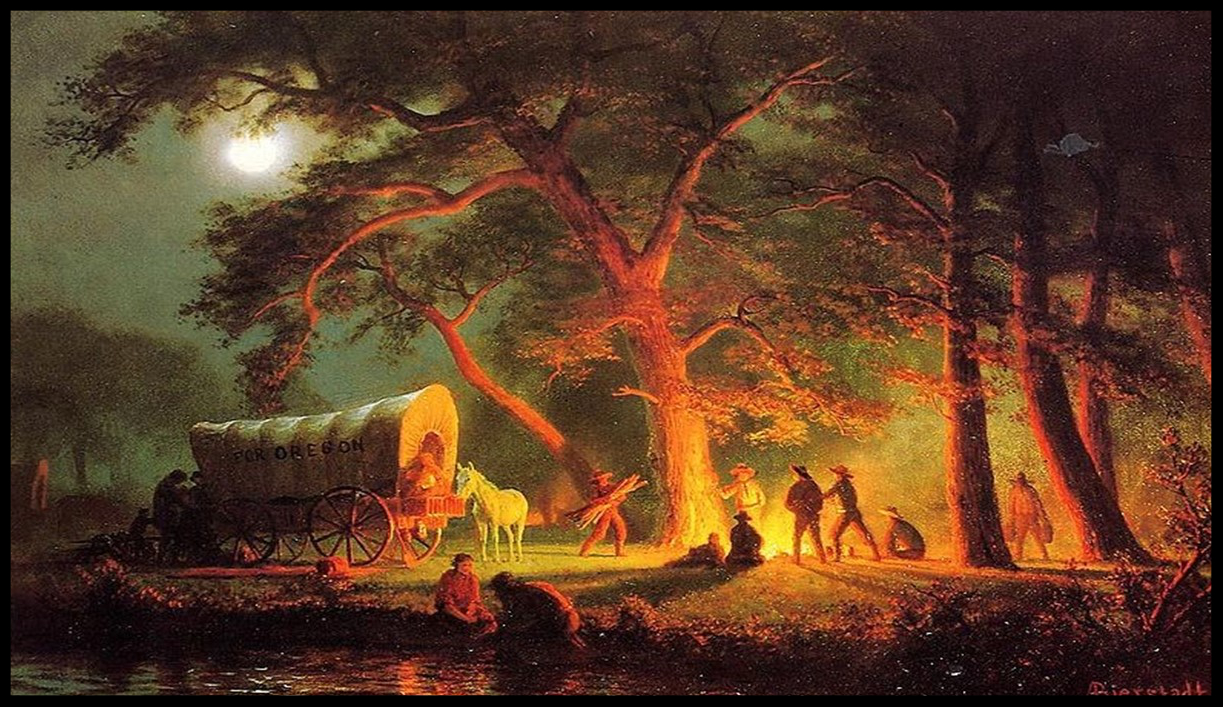 Union forces camping near Savannah River with at least $450,000 in gold

By mid-May, the union forces had captured the Treasure Train in Washington City, GA – after it had fled first to Augusta (some believe trying to get to Savannah) and also trying to plunge further south to Macon (but the Union forces had occupied that key town) . . . the Bank money was not confiscated by the North, but was permitted to try to return to Richmond with very scanty protection and with some dubious circumstances, many paroled soldiers knew about the Richmond bank money and felt that it belonged to them — or otherwise the North would ultimately snag it.

So — on the first day of the trip north – near the Savannah River, the small party and at least $450,000 in gold was camped for the night; bushwhackers attacked them and made off with at least half of it . . . the place where that occurred is now called “Graball Road.” 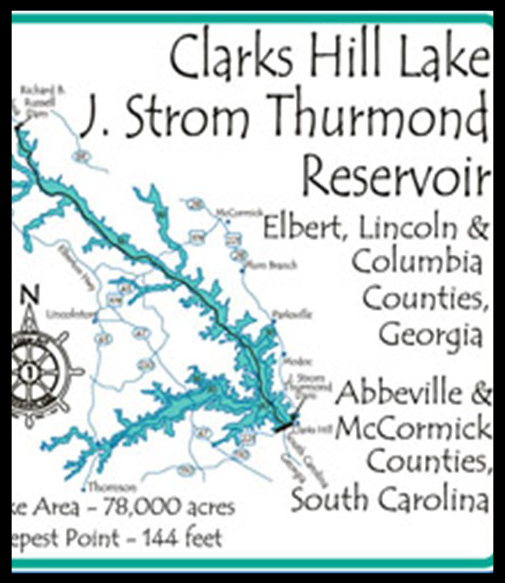 Clarks Hill Lake - what treasures and tales lie beneath?

In 1954, a mighty power dam was built upstream from Augusta, GA – flooding 75,000 acres on both sides of the Savannah River and drowning the riverside towns of Vienna, SC, Petersburga, GA and Lisbon, GA – as well as the Revolutionary War site of Fort Charlotte. All were witness to the Civil War and all were present when the Confederate Wagon Train rumbled into Georgia.

The sunken cities are now under 30 feet of water. And many other locations that saw Civil War and Treasure Train action went under water – the Broad River (where Petersburg was) was flooded and is part of the reservoir. Lincoln County GA alone lost 40,000 acres of land and history. Who knows what treasures and tales lie beneath the Clarks Hill Lake? 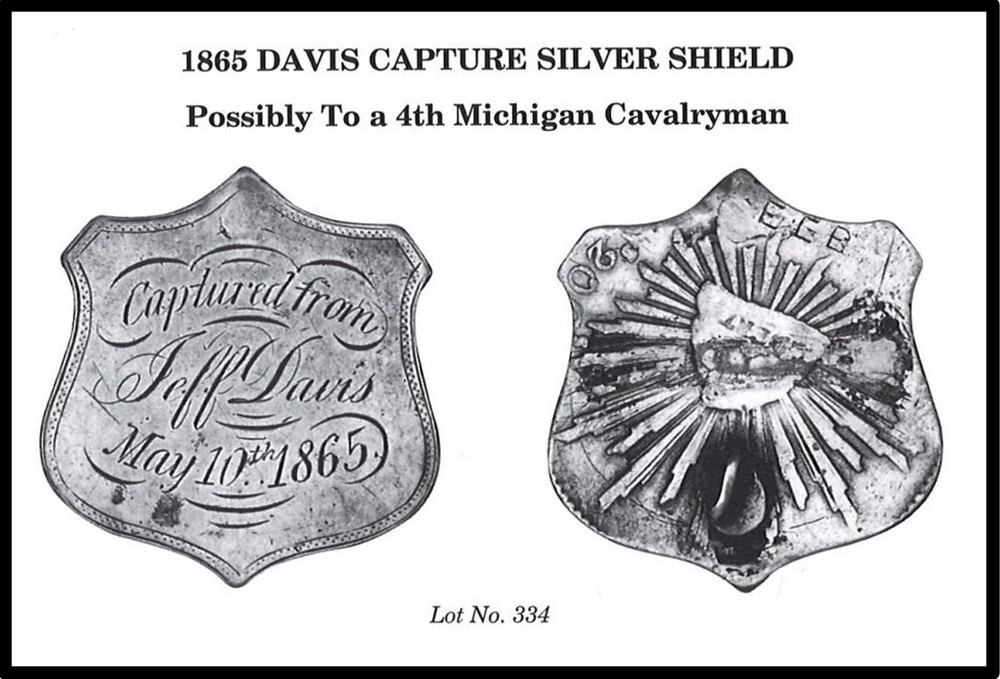 Jeff Davis Capture Silver Shield - made from a Reale Coin

CSA President Jeff Davis was captured in the Georgia hamlet of Irwinville on May 10th without incident. He had on his person a rare coin — a Confederate Half Dollar struck in New Orleans — which was confiscated upon his arrest. It was no doubt a talisman — a source of confidence and purpose for him.

He was captured by Union cavalry from Michigan and Wisconsin. These soldiers were ultimately awarded a reward froom the US Treasury in the amount of $100,000 in gold, as authorized after the War by the US Congress.

With less fanfare, a few of the men where awarded with a special hand-crafted silver shield – believed to have been produced by hand from Mexican Silver Reales that were either with the Davis entourage or from the Treasure Train as part of the CSA Treasury. The reale coin with the sunburst rays and the liberty cap can be clearly seen on the right-hand side.